Introducing April's Angler of the Month! 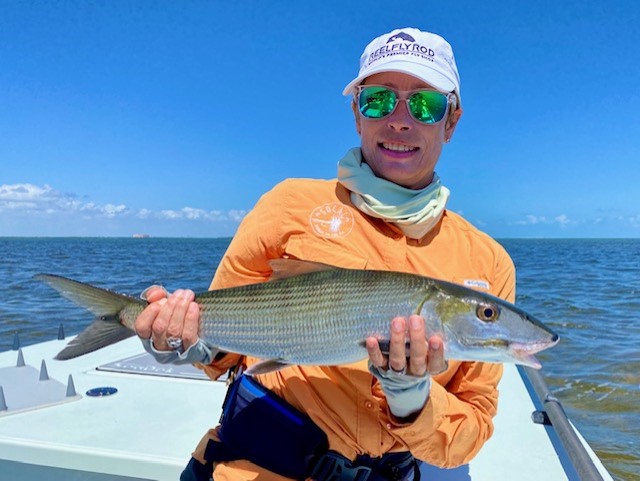 Angler of the Month

ReelFlyRod's Angler of the Month program is back after a brief hiatus!

For April’s Angler of the Month, the ReelFlyRod pro staff has selected Jennifer Holbrook of San Diego. Jenn has become one of the most ardent supporters of the ReelFlyRod brand and is what we consider an excellent ambassador to the sport of Fly Fishing. Jennifer has shown her passion for fly fishing as well as the enthusiasm to expand and share the hobby to others. For these reasons, our staff had an easy time choosing Jenn as the most recent ReelFlyRod Angler of the Month.

Jennifer is the founder of SoCal Women on the Fly, a group which aims to connect women fly fishers in the Southern California region.  With an active group of members, SoCal Women on the Fly organizes monthly trips in the area and mingles with other women’s fly fishing groups from nearby locales.

We had the chance to speak with Jennifer about her experience and love for fly fishing.

Where are you located and which bodies of water do you fish?

I’m located in San Diego, California, which has numerous fishery options. San Diego Bay, Mission Bay and the Pacific all offer inshore saltwater fish varieties, our beaches serve up surf species, there are offshore bluewater opportunities, and our freshwater fisheries include many reservoirs and lakes. And for my trout fix, I hit up Colorado twice a year, and much of California’s Sierra Nevada is accessible via road trip.

I fish almost all of these fisheries whenever the tides, winds, temperatures and other conditions are favorable. Most commonly lately, I’ve been using my Hobie kayak to comb the south and north ends of San Diego Bay for whatever will eat — spotted bay bass, halibut, corvina, sand bass, corbina, bonito, mackerel, croakers, bonefish (holdovers from El Nino summers past), and even a few species of sharks. The only San Diego fishery I haven’t really tapped (yet) is the offshore pelagics, but come summer, I’ll be targeting them in between corbina outings.

What gear is used to pursue that species?

My set up for the Bay is a 7wt Orvis Recon, custom Nautilus XL reel, and the 250gr SA Sonar Surf fly line.

Can you tell us how many days you spend on the water?

The short answer is “as many as possible”! It isn’t my work, but I’m able to do a fair amount of fly fishing travel to Colorado and Florida (the most “home state” I had growing up as a military brat). I’m also the founder of an online women’s fly fishing group that holds clinics and outings — SoCal Women on the Fly — so I’m probably just under 100 days a year.

When did you start fishing?

I started fishing as a kid with my grandfather in Miami and in the lakes by our house in Virginia Beach, VA (late 70s). I gave it up for awhile after a relocation, and didn’t get back to fishing (fly fishing specifically) until 2017. Now, I can’t get enough of fly fishing, and even during recuperating from a recent rotator cuff repair, I learned to cast left-handed so I could keep chasing the fish!

Who was it that introduced you to the fly fishing?

The person that introduced me to it was me! My dad had dabbled in it a bit during the early 2000s — at the time, I was new mom living a country away so couldn’t join him, but that’s how fly fishing was on my radar. After another shorter time warp, I took my husband on a road trip to Utah and Colorado for his 50th birthday where I had hired a guide for a Gunnison River float trip. After really seeing a hatch for the first time, and catching numerous brown trout, I’ve been all in. Every single brown I caught on that day, I was just blown away by how pretty they were. I’m sure the guide thought I was completely ridiculous, because I just couldn’t stop exclaiming “They’re SO PRETTY!” every time we netted one.

Can you explain what you get out of fly fishing?

I’ve always been outdoor adventurous and a water lover, and now I get to spend a lot of time in beautiful places, on the water, and on the hunt. To me, the rush of the hookup can only be matched by the wonderful surprise of discovering what species I managed to convince to eat my fly! I tell my SoCal Women on the Fly group members it’s sort of like getting jewelry for a gift — there’s something amazing in that little wrapped box, and even though you don’t know what it is, you know when you open it, it’s going to be amazing and you’ll love it.

Do you have any tips for new anglers? Any tips for experienced anglers?

I have a few tips for new anglers:

3. Buy nice or buy twice! Unless, of course, you’re a fly angler that likes to continuously replace and upgrade gear (and there are NONE of those in fly fishing, right? ;-)

My only tip for experienced anglers is to not be too unkind to newer anglers. We all have some places, techniques, flies, etc that we like to keep on the down low, and that’s fine. But there’s no reason to be a total douche to someone who is just trying to figure it out. Share some, but not all, and be encouraging when you do it — maybe even consider taking someone under your wing mentor-style. Remember we were all beginners once.

When was your first experience w/ RFR?

My first experience with reelflyrod.com was when I was doing some gear upgrades. I had some equipment that I’d been using HARD, and it was feeling a little tired. I purchased a 5wt Loop Q because I’d had the opportunity to use one a friend had and treated myself to an Abel TR Larko brown trout reel as a kind of homage to the fish that really turned on the addiction.

Why do you love and continue to support RFR?

I really can’t say enough good things about Reelflyrod.com. The thing that keeps me coming back is the amazing customer service. I have ordered a few things that are customizable, and I have never called their place during business hours and NOT gotten a human on the other end of the line. That in itself is SO rare these days.

And what may not seem like such a big deal to most anglers — that the human I reach at reelflyrod.com (usually Ryan or Clay!) listens and talks to me like I’m an angler — IS a big deal to me. I can’t tell you how many times a shop owner has assumed I was looking at gear for my husband or boyfriend; or assumed I didn’t know a damn thing about a piece of equipment and talked to me like I shouldn’t even be there looking at it, because I surely didn’t know what it was for; or my personal favorite, ditched talking to me about something I was considering buying because their more regular band of bros showed up, and they’d rather talk to them. I’ve also had a salesperson elsewhere admit they didn’t know the answer to a question, said they’d find out from the manufacturer, and they’d call me to let me know, then never hear from them. At reelflyrod.com, if they say they’re going to look into something and call you back, they do. I also really like the ReelCash program that rewards regular, frequent buyers.

If you have a great local fly shop, by all means support them. But there are too few retailers offering ReelFlyRod.com's gold-level customer service these days, so having found them, they get my business.